The ethical use and handling of DNA is a critical consideration in any synthetic biology project. Never has this been more important than now as novel genome editing systems are being discovered and developed as molecular tools. The development of such systems is rapidly moving ideas from the arena of science fantasy into the reality of today. Here we describe what is possible and what is not when using CRISPR/Cas9, and discuss the safeguards being implemented to improve its accuracy and limit off-target changes that could have deleterious effects. In addition, we will discuss the importance of promoting public understanding of genome editing. 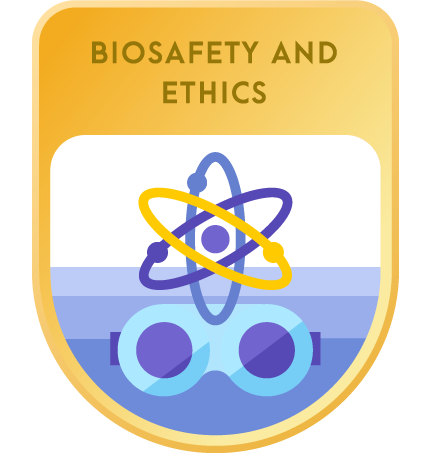 Even with wide field usage around the world, many people still maintain their ethical and moral reservations. Genome editing is accompanied by a constant stigma, and association with “playing god” or unnecessary tampering with living things (especially in regards to humans) remains a great fear. Even locally in Cambridge, GMOs have come to light in a town decision to require any product that was created with complete or partial genetic modification to have a label (Abraham L. Breaking Bread 2017). The fears surrounding CRISPR are vast in quantity and often stem from different risks or possible side effects. Each worry, however, is almost completely unwarranted in almost every regard. The general practicality of CRISPR has only come under question when an unlikely narrative is presented: ecological contamination, off-target deletion/modification , incorrect sequence insertion and, perhaps most prominently, designer babies (Rodriguez 2016). These are all real concerns when using such powerful genetic tools as CRISPR and are all undoubtedly possible; however, unbeknownst to the majority of CRISPR’s detractors is the probability of such events. The hysteria and uncertainty that almost always accompany such controversial developments greatly impede the onward advance of science and medicine. It is essential with such subject matter to weigh the risk and reward presented: do the risks attributed with the system bear enough gravitas to limit CRISPR’s application, or does it have more potential to benefit mankind?

Perhaps one of the most reputable and often-presented problems with the CRISPR/cas9 system is its sensitivity and the possibility of an undesired off-target modification or deletion. This is not an impossible occurrence and in some homologous genomes is even frequent. It is crucial to have a general understanding of what CRISPR/cas9 is and its method of editing genomes to eliminate or at least lessen the risky reputation given to the system and genome editing in general.

CRISPR/cas9 originates in specific bacteria and archaea that over thousands of years have developed defense systems in the evolutionary arms race against viruses. When a viral agent or bacteriophage attacks a bacterial cell, surviving bacteria will save segments of the invaders’ DNA. CRISPR stores the viral sequence in between bacterial genetic repeats, which is exactly what the acronym CRISPR means: clustered, regularly interspaced, palindromic repeats. The CRISPR aspect of the device is pivotal in identifying the viral agents. If a viral agent is detected inside the bacteria, CRISPR scans its archive of potential virus sequences and prepares RNA for a special enzyme known as cas9. The cas9 enzyme is an endonuclease specifically intended for cutting genetic sequences. A guide RNA is created by CRISPR when it copies its spacers (viral DNA). Then, cas9 receives the guide RNA and drifts through the bacteria until it locates the invading virus. If the RNA is complementary to the viral DNA it latches on and the cas9 effectively cuts the DNA in half, making the virus unable to take over the bacteria cell.

This method is incredibly efficient and scientists can easily make genetic edits by simply inputting the desired sequence into the CRISPR/cas9 system. The cas9 carries the guide RNA and if the scientists intend to create a modification, they couple the system with a modified repair template that inserts a new genetic sequence with the intended trait. The repair template inserts the new genetic sequence via homology directed repair (HDR) or non-homologous directed repair (NHEJ). For almost all modifications, HDR is preferred or required, as NHEJ is only capable of editing a few nucleotide bases. HDR is often used in homologous recombination in the case of the cas9-initiated DNA strand breaks.

Though efficient, the system is not infallible. The problem often occurs with the guide RNA, which is crucial in locating the desired genetic sequence. In homologous genomic structures or if the guide RNA is not assigned to the correct target sequence (though highly unlikely), off-target or unintended changes can be made. In rare cases, the system may make additional changes or invoke an immune response (though this has not been confirmed). All of these possibilities could lead to disastrous side effects. Off-target mutations are a real probability with CRISPR/cas9 and are one of several factors that have caused a large lack of implementation within the system and its limited legality in many nations, including the U.S. Even with the system being cost-effective, efficient and safe, the small possibility of such procedural complications is perhaps the driving force behind its limitation.

A fear of systematic inaccuracy and lack of reliability now overwhelms any notions of safety to many persons with pre-existing moral incompatibilities in regards to CRISPR/cas9. Recently, however, many measures have been taken to increase the safety of CRISPR/cas9, most notably the discovery of anti-CRISPR protein inhibitors such as AcrIIA2 and AcrIIA4 (Dong 2017). These protein inhibitor systems are derived from various sources. In the evolutionary arms race between bacteria/Archaea and viruses, each have made biological advances to ensure their respective survival. Numerous viral agents have developed inhibitory proteins, eliminating the ability of CRISPR/cas9 to make genetic changes. Several proteins inhibit the efficacy of the guide RNA or prevent the cas9 and helicase enzymes from cutting strands of DNA. This process eliminates much of the risk attributed with the off-target scenarios and is also useful in nullifying any additional attempts by CRISPR/cas9 to make genetic changes beyond the target sequence. This development is of utmost importance to the safety of the CRISPR/cas9 system, as those utilizing the device have an effective method of shutting off CRISPR and ensuring off-target results practically never occur.

Many moral and religious arguments are often presented to halt the implementation of advanced and largely new discoveries. Semblant to the stem cell research limitations observed in the U.S., the purpose or implementation of a system is often ignored due to potential dangers or violations of the moral, ethical and religious views of non-researchers. This is blatantly obvious in the backlash towards CRISPR/cas9, which for too many objectors, is an act of playing god or defying the natural status quo of the biological order. Many times, because of the pious nature or moral disagreements of a multitude of individuals, the potential benefit of a specific system is abandoned.

Herein lies the argument of “designer babies”: this theoretical concept centers around genome-modifying tools (mostly CRISPR) being utilized on pre-birth children or embryos to ensure desirable traits. This process of editing embryos in vitro would allow potentially harmful genetic sequences that encode diseases to be edited by CRISPR/cas9. The disapproval of genetic scanning and alteration in the embryonic stage stems from fears of parents changing the embryo’s eye color, gender, hair color, etc., which if they are consenting, should be allowed. This complication of utilizing CRISPR/cas9 in the medical field has produced more detractors of gene-editing, has proliferated the overregulation of the gene editing field and CRISPR, and perhaps worst of all, has slowed the advancement and implication of genome editing procedures and research.

The CRISPR/cas9 system is still relatively new to the scientific world and many outside of it (and even some within) still hold moral objections to its intent. GMOs are considered unsafe by many for vague reasons pertaining to their genetically modified origins. Genome editing has become synonymous with mutation and artificiality or lack of safety. It is imperative that those who object to the use of genomic editing devices like CRISPR/cas9 thoroughly research the numerous benefits genomic modification has yielded us. Researchers throughout the world are using CRISPR/cas9 for various reasons: MIT is proposing the use of CRISPR to create a gene drive that could potentially wipe out Zika (Mindsight 2017), and researchers in China are conducting tests on patients with cancer to see if the genes that allow cancer cells to expand can be nullified by CRISPR. The possibilities of CRISPR seem only to expand and with the recently discovered and vetted anti-CRISPR proteins, the previously held safety concerns have been almost completely removed, with the majority of remaining concerns being ethical ones. As the system becomes more widely used and deregulated, many more developments will arise surrounding CRISPR, more medical and scientific breakthroughs will occur and moral objections will diminish as the limited dangers of the system are gradually (or rapidly) diminished.

I’d like to thank Dr. Mangus for assisting me throughout the writing process and providing examples of the importance of CRISPR and genome editing projects/research.